St. Martin as a bishop: modern icon in the chapel of the Eastern Orthodox Monastery of the Theotokos and St Martin, Cantauque, Provence.

The feast of St. Martin of Tours, sometimes known as Martinmas, falls on November 11. In the United States, we celebrate November 11 as Veterans Day – a day we honor those who have served in the military of the country. It is a national holiday, though many businesses are open and retailers offer sales in the hope of luring people who are enjoing a day off!

As a child, I remember hearing people from my grandparents’ generation speak of the day as Armistice Day. This was the day, in 1918, on which World War I stopped. The Armistice was declared and hostilities were set to end at the 11th hour of the 11th day of the 11th month – and so they did. That was a war called “The War to End All Wars,” but unfortunately, it didn’t. So, when World War II followed all too soon afterwards, the name of the day was changed to Veterans Day, in honor of all veterans.

It seems appropriate that the feast of St. Martin of Tours coincides with this day of honoring those who have served their countries militarily, as he too served in the army. His life and contributions to the Christian community are discussed in greater detail in an earlier post, and they were impressive. Nevertheless, he is most commonly known for the legend told about him, in which he is approached by a begger and asked for help. Martin is said to have cut his military cape in half and given half of it to the beggar. Later, in a dream, he saw Christ in the form of the beggar, wearing the cape.

Martin was not a Christian at the time he served in the Roman cavalry, but had entered the Catechumenate before entering the military. Before he left the army, he had been baptized. As his faith grew and deepened, he became convinced that as a Christian, he could not kill, even as a member of the military. He accepted arrest and imprisonment rather than fight. He volunteered to go to the front of the troops, unarmed, but a peaceful solution was reached before the battle, so he did not have to prove his courage and commitment to non-violence in that way.

It seems to me that Martin’s insight that killing is not the calling of Christians is one that has been shared by many men and women who have served or refused to serve in military forces through the centuries. Certainly, there have been times when Christians have turned their backs on this belief, even claiming that killing was done on behalf of God. For those times we must beg God’s forgiveness and that of those harmed. However, the veterans I have known generally will say that war is never the best answer to human disputes. Terrible things happen in war. It does not really resolve the problem between nations. Sometimes it seems to be the only way to stop a terrible evil, but it’s never the best option. (Stopping the Holocaust is often given as an example of a good reason to go to war, but it must be acknowledged that even World War II was fought not to stop the Holocaust – of which there was very little awareness outside of Europe – but rather to stop the military aggression of certain nations.) Martin of Tours would agree that war is never to be the first response of nations or their people to conflicts with others.

But what, you ask, is Martinmas? Martinmas is the name of the celebration of Martin’s feast in Europe. I first experienced the celebration of Martinmas when my sons were little and attending Waldorf school. (Waldorf schools celebrate many European Christian holidays.) It is a harvest festival. It is a festival that marks the end of Autumn weather and the beginning of Winter weather in many nations. The thing that was most fun about the feast was the custom of making lanterns and going out after dark to walk with the lanterns.

For a week or more before the feast, the children would make lanterns of paper. Some were simply construction paper colored by the children and rolled into a cylinder with a bottom and a wire handle. Others were more elaborate. Sometimes a balloon was inflated as a base and tissue paper layers glued over the balloon to form the lantern. Once a wooden frame was built in the form of a star. Then layers of tissue paper were applied to form the walls. Leaves and glitter were included on that lantern. That one hangs in our living room to this day, a beautiful reminder of a school festival and a saint’s feast day.

(In some schools, glass jars are decorated for lanterns. They are also beautiful, but tripping in the dark can result in dangerously broken glass. Plastic peanut butter jars might be a reasonable solution to that problem!)

Once completed, the lanterns are hung by wire from a stick, a candle placed in the bottom, and children and parents sally forth in a procession around the school or neighborhood. In some countries, children visit neighbors and receive candy or other treats – much like Halloween in the US. 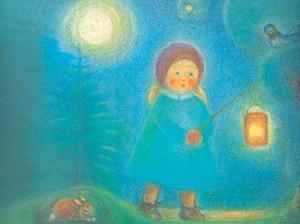 If you decide to celebrate Martinmas with a lantern walk, be very careful with lighted candles. There are now battery-operated “candles” that you might consider using, especially for very young children. We never had any serious accidents, but I’m sure Martin wouldn’t mind opting for safety on his feast.

After you go out for a little lantern walk, follow up with a warm dinner and/or dessert, lots of laughter and fellowship and a happy night’s sleep.

Happy Martinmas! Happy Veterans Day! And may the Lord help us all to find better ways to resolve our differences.