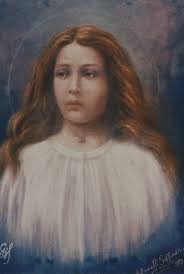 The feast of St. Maria Goretti often leaves me feeling conflicted. Maria Goretti died in 1902 of stab wounds inflicted during an attempted rape when she was 11 years old. On her deathbed, she forgave the man (a 20 year old) who had mortally wounded her. He was the son of the family with whom Maria and her family were living. After serving his prison term, he lived an exemplary life as a lay member of the Capuchins (one branch of Franciscans). He was present for Maria’s canonization in 1950.

Apart from the speed with which the canonization process moved forward, I find myself wondering what it was that distinguished Maria Goretti from the thousands of other girls and women who have been raped and/or murdered by men who should have protected them. What made her suffering and death different from those of the other innocent victims of violence and violation among the women of the world?  Surely she is not the only one who has forgiven her attacker? Would she have been praised or even forgiven if she had submitted without a fight in the hopes of living on? What happens to victims who are not killed? What happens to those impregnated by their attackers?

Violence against women and girls has been a technique/weapon of war for centuries. When we hear of it today ocurring in non-Western countries, we “tut-tut” about the incivility of such behavior. We speak of enemy combatants versus innocent civilians. Generally we simply expect the women and their children to be helped and supported by their families and communities, though we know this is rarely the case. And we look down on cultures in which a woman who is no longer a virgin can never find a husband (read “social identity and security”) or be accepted as a respected member of her community.

But are we in the Western world all that much better in the way we respond to women who have been raped? Recently I heard a prose poem on National Public Radio that quoted women who had been raped. They told about the experience and the reactions of their families, spouses, friends, police officers and medical personnel. They spoke of the fear and shame and sense of vulnerability they experienced in the moment. And then they told of the aftermath – as spouses treated them angrily or forced themselves on their wives in a sort of reassertion of ownership of their wives’ sexuality. They told of insensitive law enforcement officers and medical personnel, who assumed that their lack of physical wounds or signs of having been beaten meant that they had consented to the violation.

The poem ended with words I won’t soon forget, “I thought they would understand.” It was clear that the more hurtful and profound rape was the emotional and social one that these women were now forced to live. These women who are our sisters, mothers, neighbors, and friends.

So I think there are some fundamental questions we need to ask ourselves as a Christian community. How do we care for and support the woman who was the victim of this terrible aggression? How do we help her feel safe in her home again? How do we help her if she finds herself pregnant and alone afterwards? What if she is still a child herself? What if the strain of bearing her rapist’s child threatens to drive her over the edge into madness? How understanding and accepting are we if she submitted in order to save her life and/or that of her other children rather than fighting to the death?

While it is beautiful to praise a child who resisted the advances of a much older man and died as a result, I pray that we not stop there. Please, may the terrible accusation, “I thought they would understand” never be leveled against us because we focus too narrowly and insist that only one path through that awful valley of darkness is the right and praiseworthy one!

Pope Francis Wants to Hear from You!

Pope Francis has invited people around the world to share their hopes and dreams for the Church, as well as reflections on their experiences with the Church. We invited you as well. Summaries of responses received thus far are being prepared. If you have something to share, please reach out. The time is at hand. Peace be with you!