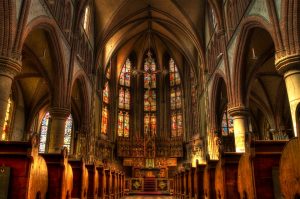 Neotraditionalist forms of Catholicism that repudiate the Second Vatican Council seem almost perfect illustrations of commodified nostalgia. … Such nostalgic retrievals inevitably idealize the past by abstracting it from the particularities that created it and sunder it from any organic relation the present …Inevitably such traditionalist retrievals are not only innovative but also deeply contemporary. Fundamentalism is a thoroughly modern phenomenon.[1]

Mitchell quotes Vincent J. Miller[2] above on the non-traditional nature of the neotraditionalist Restorationist movement in the Catholic Church. Interestingly, those Catholics adhering to Vatican II’s contemporary Novus Ordo liturgy can also miss the point. They tend to see liturgy as a “production”. It becomes a work of human artistry and creativity that is choreographed, rehearsed, and performed. According to Gallardetz, choosing between a “relevant” contemporary style of liturgy and “transcendent” traditionalist one is a false dichotomy. The quests for transcendence and community cannot be separated since liturgy is a communion with God and one another. [3] This contemporary divorce reflects a schizoid culture in which literalism forecloses on the sacramentality of metaphor and denies our entry into the eternal hymn beyond our comprehension but within our joy.

Mitchell refers to the “lie” of the metaphor “The moon is my mother”. [4] It is not literally true, but it is true in a deeper sense. The contradiction, the juxtaposing of unlike things opens something else up entirely. In our post-modern consumerist culture our communion is achieved not through the consumption of sacramental elements but the consumption of goods and services. Such a ”communion” only links us to ourselves in our solitary confinement. Our homes, bank accounts, and cars point to nothing beyond ourselves.  Their nameplate brands may offer us explicit and implicit association with excellence, luxury, and power but they are cold comfort on a winter’s night.

In much of our worship we attempt to tame the divine by literalizing and explaining the metaphors of the rites. We have sacred spaces that we do not hallow. We explain the musical score while refusing its transport as something beyond sound and rhythm. Most tragically, perhaps, is that we are joined by fellow spectators in a comfortable and comforting venue. They are nice people and we know many of them from around town.

We are like infants who can play in parallel. Only much later can the child begin to play in encounter. Whether a rock band or schola cantorum is on the marquee, we have come to pray as individuals to be with and to be removed from those around us.  Yet we cannot be that eternal doxology, we cannot join the dance of the Trinity because we are not emptying out ourselves for others. We are in proximity but not in relation. This is often true not only within church walls but in our homes. We have entire industries to manage and develop personal and business relationships but none of them are based on communion. We have definite rules about qualifications to receive the Eucharist but no real requirements about being community to effect the Eucharist. Certainly, we have rules about church attendance but nothing about what attendance is beyond physical presence.

Jules Henry, [5] the anthropologist, decried the commoditization of humanity in mid-twentieth century American society. In his view, the advertising industry embodied by Madison Avenue created consumer demand in Americans by preying on human vulnerability. People were sold goods and services that could make them more attractive, more powerful, and more valuable. The recent and very successful cable television series “Mad Men” [6] portrays the creators of this consumerist culture and the ways it destroys their lives. Henry saw the adoption of consumerism as part of an effort to deny vulnerability by covering it with a sham that created a false self. Over time the tension between the false self and the real self, caused a deep alienation manifested in self- destructive behavior and addiction.

Henry decried the rise of the meritocracy, that our worth and social position are measured only by our most recent achievements. Henry said that people were becoming “pecuniary” or seen only as amounts of financial wealth. Today we would say that people are being “monetized” the way in which we seek to find ways for people to give us money for visiting our websites or using our apps. Our relative worth today is legally based on our current and projected income. Settlements paid out to the families of the 911 attack on New York City were based on the current and projected life long income of the deceased. [7] People lose their jobs, their social standing and worth all at the same time. The companies they have worked for see them as commodity resources.  There is a growing trend for companies to lease employees from a corporation whose only task is to employ them, provide few if any benefits, and place them at the client’s worksite where they have no job security nor prospects for advancement.

This is the lived experience that people are immersed in when they enter the doors of the church on Sunday. Unless we build communities by organizing them in the sense of empowering people to tell their own stories and to create community to overcome consumerist alienation, we can have no real community of praise and thanksgiving. Our rites become colorful or blasé performances or productions of comfort. At worst they become a venue for celebrating one’s monetary success and status. Our sacraments become rites of passage and self-congratulation. Our sacred spaces become artistic venues for video productions.

Our life of praise, wonder, and thanksgiving-communion is a living doxology. It is a hymn of praise echoed by all creation. It is voiced by a human communion transformed by and caught up in the communion of the Trinity. Unfortunately, many times when we offer this, we and others love the words so we eat the menu and wonder why we are not nourished. In other words we think that when perform the liturgy correctly we have done our part. In the restaurant all we have to do is to be polite and read the menu. No passionate, messy eating and drinking is involved. However, we are called and redeemed by making physical our response to God’s activity in the Body of Christ. We are called to live in the Trinity by transforming our lives and those around us in justice and charity. If we only show up and follow the rules without the fire of the Spirit, our communion is only laminated cardboard.

[7] Between Tragedy and Farce: 911 Compensation and the Value of Life and Death